So Thursday morning, we did the less than two hour drive up to Pittsburgh – we’d never been in this part of the state so we decided to get a hotel on the north side, unhitch the trailer and go see some sights.  It was a gorgeous sunny day with a pleasant temperature of about 19C / 68F.

First, it was to visit one of the two remaining Inclines: Duquesne.  There is an amazing skyline view of the city up top and then we took the funicular down.  Pittsburgh has quite the high cliffs on the south side of the rivers: the Allegheny and the Monongahela (you can see them mixing up in the photos).

We had the car completely to ourselves on the way down; unfortunately, not on the way back up; we had a family with a screaming child so no quite so pleasant.  Luckily, it’s like a two minute ride.

Next we drove over to Canton Street, heralded as the “steepest street” in America. (37% grade)

Of course we drove up it

Then after some lunch, we crossed back in the downtown area and went to Carnegie Mellon University where we saw the Kraus Campo (for some reason known as the “math garden”)

And then the Walking to the Sky monument.

Last stop was to see the tiny street of Rosslyn Place – made with wooden bricks!

We returned to our hotel, Doug hitched up the trailer again and we spent a quiet night at the hotel ordering pizza for dinner.

Friday it was sunny and even warmer and we continued up the I79 northward towards Lake Erie.

We did make two stops:

First was the town of Mars where we saw a space ship! 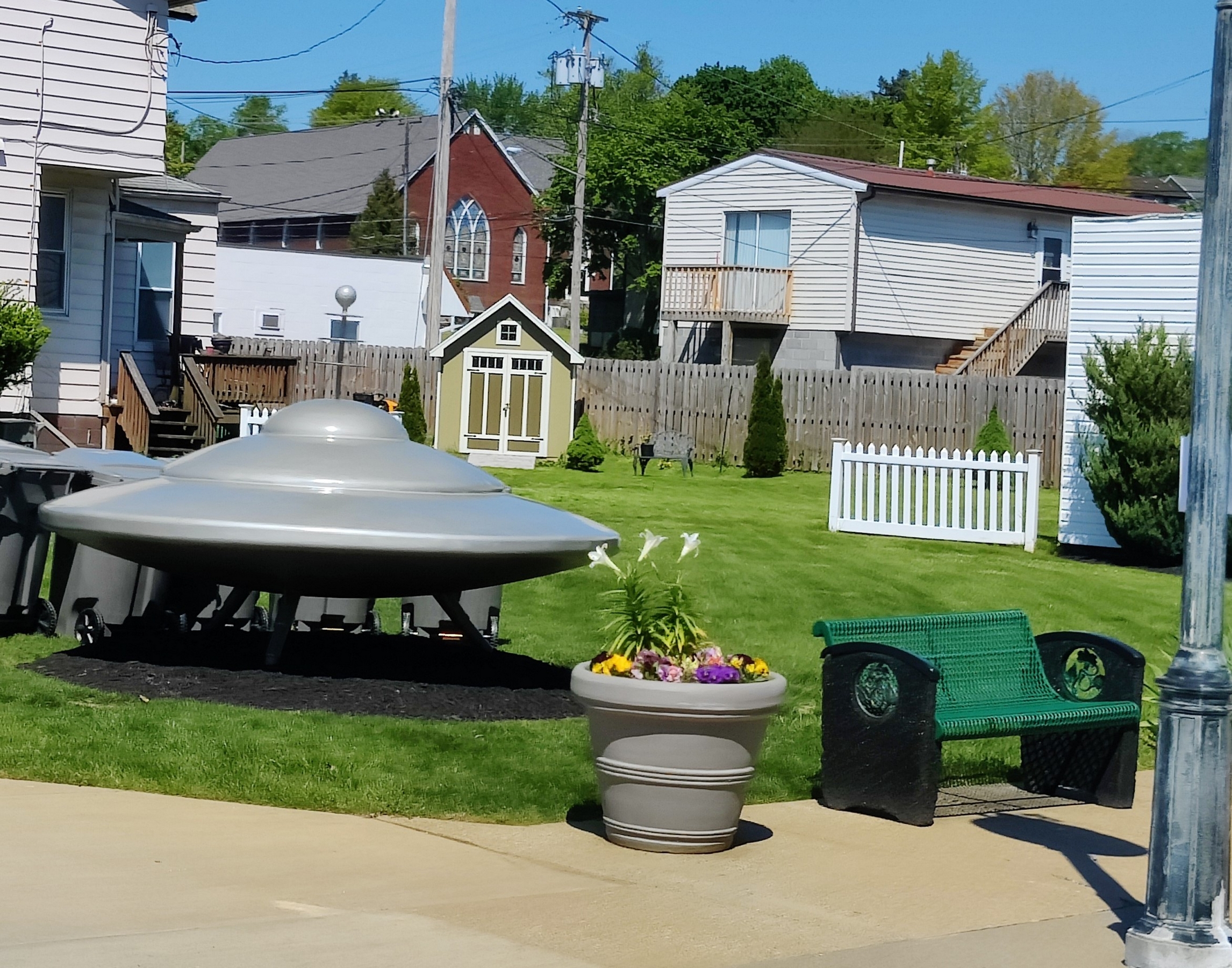 Then on to Grove City where we saw:

And a large fish on a hook:

We arrived in Erie, PA about mid-afternoon and settled in for two nights – no driving tomorrow!  We are nearing our destination of Buffalo, NY and don’t need to be there until Monday.

The place to wild camp here is a huge casino/horse race track overflow parking lot – completely empty due to COVID so we had our pick of parking locations.  We chose a level spot away from the main road next to some grass.  Doug did a half marathon walk on Saturday morning and we had a chill day; weather was mostly sunny and pleasant and it was quiet here.

Sunday we wanted to empty our tanks and there were no free sani dumps in Pennsylvania close to our route so we found a campground just inside New York state that could be free.  It wasn’t far off our route so it was worth a shot.  We arrived at Findley Lake and it turned out it was not free for non campers so for the very first time ever, we paid to dump our sh*t! We weren’t going to fill our water tank but hey, we’re paying, so we did!

Then it was on to run a couple of errands before landing in Jamestown, NY – the birthplace of Lucille Ball.

Here we saw a mural:

Before parking and going to visit the museum dedicated to her and Desi Arnaz.  It was well done and we enjoyed it.

We drove a little further out of town to Falconer and checked into a hotel for one last shower and Wi-Fi before pushing on to Buffalo.

We arrived at the home of Kevin & Amanda (where we store our Honda Civic) and they had made a space for our truck & trailer into which Doug parked us and we didn’t have to unhitch.  Kevin gave us a power source and we settled in.  We had several packages to open and mail to go through.  Amanda allowed Fran to get a load of laundry done and she went for a hair cut before it had to go into the dryer.  We did some more packing and Doug walked to pick up a pizza for dinner.  Next morning, we finished the pack and called an Uber to get us to the airport.  Our flight to JFK was on time and we had no glitches.

We arrived 7 hours before our flight to Iceland so with some difficulty we found a place to eat (many places were closed or  you had to have a boarding to access most places.  We couldn’t get our boarding passes until 5pm so we had the afternoon to kill.

Our flight left on time, was barely a quarter full and we each got a row to try and get some sleep (not).

Until we return, everyone keep well and watch for some FB updates on our happenings.

Arriving in Norway & Exploring Oslo and Beyond