Returning to the States to get to Mexico

We left Mary & Gavin’s early this Wednesday morning, found a sani dump and caught the ferry from Nanaimo to Horseshoe Bay near West Vancouver.  First stop:  our friends, Therese & Pat in North Vancouver.  We had brought them the cod fish that Bill gave us and we had a great barbeque dinner with them.  They invited us to stay in their guest room which was more than welcome because their house is on a hill so Tigger was on an angle!  It was quite smokey over here.  We put a sign in our rig’s back window in the hopes of not being towed or vandalized.

Thursday morning, Fran enjoyed a 90 minute walk with her friend Gaye and that afternoon met up with her sister, Sandra for the afternoon including a seabus ride downtown.

Sandra joined us for dinner back at Therese & Pat’s and Therese whipped up something for us all. She’s a great hostess!

We left there late Friday morning, and made our way to New Westminster for a lunch time outdoor visit with Doug’s mom at her care home.  We then carried on, almost to the border, to Langley, where we spent the next two nights with our friends, Chris & Irene.  Here we barbequed our last piece of fresh salmon from Bill:

On the Saturday night the skies cleared and we saw stars.

After thanking and bidding farewell to Chris and Irene, we made our way to the border (less than ten minutes away) and in about 90 seconds we were back in the US.

As our plan was to get to Mexico ASAP to get some work on Tigger done to make it more sellable and to get medical things taken care.  So for the next few days we wanted to make some miles.  We stopped at Alex Smith’s in Everett to pick up an item that had not arrived from Amazon when we passed by in July and of course, a few new ones.

We made it through the City of Seattle encountering no traffic on a Sunday and stopped at our storage unit to pick up a few items that belong with Tigger and then pushed on through Washington State into Oregon and spent that night at a huge rest area south of Portland.  It had three parking lots!

Monday was another big driving day; we began seeing some smoke and evidence of fires now.

It was not too dense as made our way southeast across Oregon into the northeastern corner of California then into Nevada to see our overlanding friend, KP, who now lives there.  He was recently remarried but his wife was not well so we were unable to meet Danni.  We met KP at a Mexican restaurant, had a couple of beers and dinner before he took us to one of his favourite boondocking spots overlooking the city.

After a couple more beers he left and we had a quiet night hearing coyotes in the distance.

Next day we found a transmission place to have the hesitation issue with Tigger looked at.  They said they could get to us this afternoon or tomorrow morning.  As we’d had no luck other places since leaving Houston in July (all had long wait times of up to 3 weeks!) we opted to tough it out.  While waiting we found a dollar store and bought some “For Sale” signs.

We did some walking around town

– here’s a shot outside the Reno bus station:

And here’s the Thomas Aquinas church:

About 1 pm they got to us and Doug took a mechanic for a test drive but he was not experienced enough to figure out it.  He suggested things we’d already tried.

Then the young man in the office asked Doug to take him for another drive with a special scanner/reader and he figured it out.  It was not the tranny at all but a misfiring spark plug!  They had someone remove it and showed us how it was cracked and had been burnt several times.  They were able to get the part in less than 20 minutes, installed it and Doug took it out again  and lo and behold – Tigger was “cooking with gas”.  We were very happy especially because it wasn’t the transmission itself which could have been quite costly.

By now it’s nearly 5pm and we are exhausted; we opt to get a nearby hotel, shower and order dinner in.

Wednesday after another shower, we left and made our way to Carson City for a gas top up at Costco and to check out the prices of eyeglasses to compare it with Mexico.  We pushed on back into California.  While Fran was driving Doug was looking at route options in our North American atlas.  He saw a notation we’d made to check out Titus Canyon in Death Valley NP next time we went near there.  It was not that far off our route so we opted to check it out today.  We drove as far as Big Pine, CA today and found a wild camp at an abandoned railway station in the middle of nowhere.

We spent the rest of the afternoon reading in the shade.

we begin to see Joshua trees

a pretty canyon we drove through

We crossed back into Nevada and had a Denny’s Breakfast in Beatty before starting this spectacular drive.  The road begins outside the park and it’ 43 km / 27 mi long – all hard pack dirt and gravel with some washboard sections.  It is a one way road that takes you into the park.

The drive at first is flat and then you begin winding up the curves to the top.  You drive through the remains of the town of Leadfield:

and by some petroglyphs:

After you descend on the other side, you finally reached the actual canyon and it’s amazing. 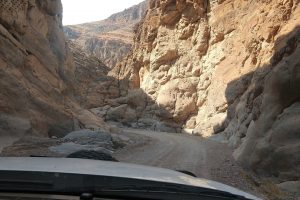 It was a long drive to get out of the park and we drove beyond that to the Alabama Hills recreation area to find a camp for the night.  The smoke continued but the rocks/hills were cool.

We stopped at two spots before camping: the info board and the Smiley Face Rock (which is really just vandalism.

Our campsite for the night:

We sat outside and enjoyed a beer to watch the sunset but it dipped behind clouds and it disappeared about 20 minutes before setting.  The midges chased us back into Tigger for the night.

Friday morning we started the day with a short hike called The Arch Loop.

We the drove and drove  for the rest of the day and made it to the Mexican border crossing of Tecate where we first got our tourist card (180 day visitor visa) and then instead of getting Tigge a TIP as is usual when crossing borders, we had the ten year RV permit we had registered cancelled in order to make it possible to sell without border issues either for us or Tigger’s new owner.  As we were only entering Baja California state, no vehicle permit is required.

« Previous : Exploring the north half of Vancouver Island