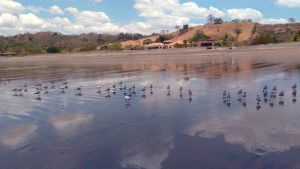 After packing up and finding Fabian, we hit the road as we had almost 300km to drive today. That’s a super big amount for us these days! Semana Santa is coming up and we wanted to get “parked” before Thursday brings the crowds and hopefully in a place that would not be affected by the partying.

The holy week schedule we saw in a church: 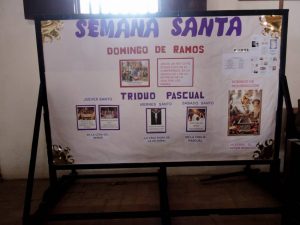 The hostel owner at Santa Catalina recommended to us a hostel that we were considering anyway, so that clinched the choice. We drove to Santiago, dropped off Fabian at the bus station, had some breakfast and did some shopping and carried on down the next peninsula.

Playa Venao is the furthest south we’ve been on this trip. We are now at just over 7° above the equator and the way Panama is situated we will not be this far south again for a few months – in Colombia!; when we ship to Colombia we will still be north of here near Cartagena.

The road here was four lane highway for over half the way and remained paved after that. It was quite a patchwork of repaired potholes for the last twenty kilometres but at least it was not gravel! Upon arriving at the hostel, the owner was not there and the guy at the desk said he didn’t think they offered power anymore – not good! He told us Lief would be back in about an hour. So we made ourselves lunch and sat in the shade beside Tigger catching the breeze. The beach here is a pretty cove with some decent enough surf that there are several surf hostels in the area. 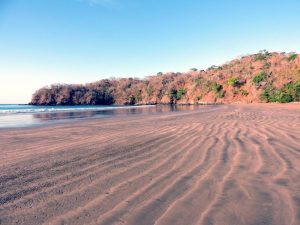 After over an hour, Doug went to check again and a  girl at the front desk showed us where we could park as they have moved the camping area since the last person checked in here in on iOverlander and there is no power in that area. So we are a little ways away from the hostel (behind some cabanas associated with it) and the camping area with no view but we have power. Shortly after we hooked up we went back to the hostel to find the bathrooms and shower and met the owner. He asked if all was good and Doug negotiated a weekly rate with him. So instead of $7pp a night, we are paying $80 for the week. This will see us through Semana Santa.

That evening we heard howler monkeys in the distance – been a while for us and it was a welcoming sound. 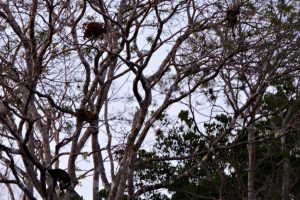 Wednesday we spent the afternoon sitting in the shade at the beach and cooling off in the ocean. For some reason (must be currents) the water is much cooler here than anywhere we’ve been in a long time – maybe since Baja North! It does make it much more refreshing though. The second time we went in, we actually disturbed a string ray as we were doing the recommended “sting ray shuffle” enter the water – good thing! Then Fran went in alone a little later and SAME thing happened but the ray was larger. The last time we went in, Doug saw one go past him while standing still! No wonder they have that sign at the front desk. 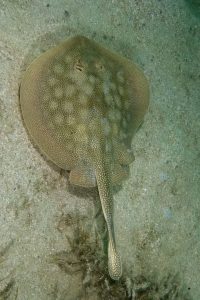 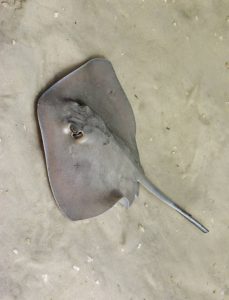 The weather here is super sunny, pretty hot, in the 30’sC/90’sF but not as humid as most of the other beaches we’ve been at lately which is nice. There is the usual ocean breeze and it actually feels cooler.

Thursday, we had a big chore to do: defrosting the fridge. Then the rest of the day was spent relaxing.

Lately we’ve been debating on one of us going back to the US to get some stuff done as it’s been “piling up”. Fran had sent her eyeglasses back with Doug last time he went to LA to work and he shipped them to Phoenix (where she’d bought them) to have the lenses replaced as they were scratched and the lenses have a two year warranty. As you know, Doug has not gone back to the US to work since then, nor has he worked at all; also both our waterproof camera (which seems dead) and Fran’s Nikon is acting up so we could send them to the extended warranty place IF we were in the US; we know that mail has been piling up and there are at least two credit cards in it so we have decided that Fran will go back and stay for three weeks, taking a week to go visit her Mom and sister in Kingston.

She has reached out to friends in our former neighbourhood (and our favourite one) to see about using their home as a shipping address and a place to stay. She will rent a car and take two days to drive to Kingston stopping to see the grandkids enroute and then stay several days before turning around and going back to Eagan, MN. We got her a decent points flight and have booked a car. So we’ll have to be in Panama City by April 25th.

We are hoping to get a shipping date for Tigger next week so when she gets back we’ll have ten to fourteen days to see the rest of Panama before going to Colombia. We’re planning on doing a sailing trip ourselves to make that crossing while Tigger goes on a ship. The RORO option takes two weeks so we’re looking into five day sailing trips that include 3 days in the San Blas Islands of Panama in the Caribbean and then two days on open water to get to Cartagena.

Friday, Saturday and Sunday were busier here at the beach as it’s Easter weekend but certainly not overcrowded. There was one group down the beach that seemed to leave its music on all night but you could only slightly hear the bass from our spot and once the AC was on for sleeping, we didn’t feel/hear it at all. 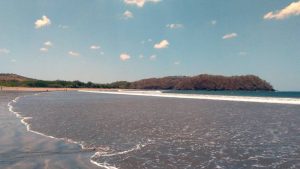 As mentioned above, while this beach has a less humid climate than Las Lajas, the dryness is reflected in the flora around us. The grass is all brown, some trees have few leaves and the hostel workers told us that the dry season will last almost another two months.  We found out that this time of year (Feb – Apr), the currents are cold and the winds are offshore; we were told that in February, surfers were wearing wetsuits!

Monday, some clouds moved in and it was getting more humid. The hostel offers a laundry service so although Fran did two small loads earlier in the week, we took advantage and had our sheets done and filled the bag to get other stuff done too.

We went earlier than usual to the beach to stay cool and then midday it began to sprinkle so we showered and went back to Tigger to have lunch. After lunch we went to sit in the common area for better internet and then around 5 the power went out. This happened twice more and the last time, it never came back on (around 7:30). We turned on the gennie to get air while we had dinner but after that we just used the ceiling fan and portable one to get to sleep with; was not a pleasant night. At least it didn’t rain so there was no issue leaving the windows and the door open. Thank goodness for screens!

We saw a few of these jellyfish on the beach here but no sand dollars. 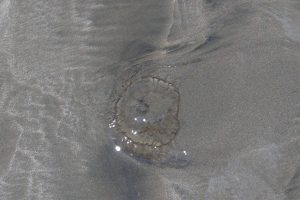 When we awoke Tuesday morning, the power was still out so we decided to leave and not just because it meant we couldn’t get AC; it also meant no Wi-fi. We left around 7:30 am and enroute stopped in the little village of Las Tablas to see its church which has quite an ornate altar area. 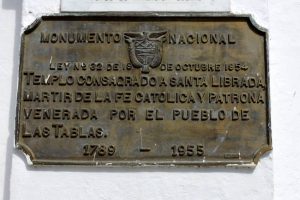 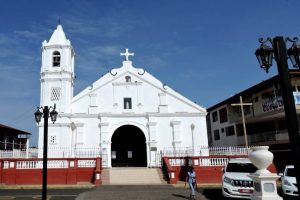 Then we got to Chitre where we stopped for breakfast and some shopping. The next stop was Natá de los Caballeros to see the oldest church in Panama – built in 1522!; almost five hundred years old. Apparently not a great deal of restoration has been needed and they still use the church every day. 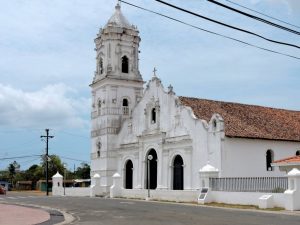 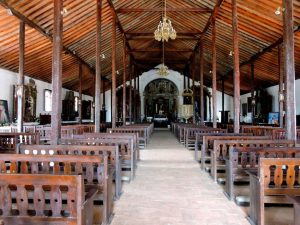 The square here is very pretty, clean and well maintained. The village has a few murals as well. Santa Liberada was in wonderful shape, the columns were whittled not sawed and the carvings around the altars and statues are quite lovely; a worthwhile stop for sure. 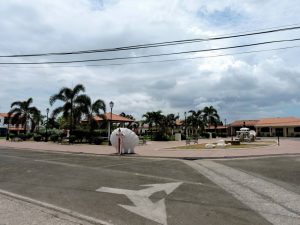