We are blessed with twin grandchildren 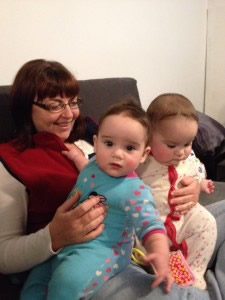 Our son Joshua, and his wife Alyx had twins on June 26th, 2013. It was not an easy pregnancy for Alyx but that day it was all worthwhile. She gave birth to a girl and a boy at approximately 33 weeks along.

Arya Fiona Jolene was born first (aka Thing One) at four pounds.

After three weeks in the NICU they went home and reality set it for us all. Joshua is fortunate enough to get paternity leave and is home with the family for quite a long while.

We were fortunate to be living in Seattle (only 2.5 hours away)  and have visited often.

Serena met them for the first time in August just before they turned two months. Their great grandmothers and great grandfather met them when they came to Vancouver Island in October.

We were lucky enough to share their first Christmas and now  they are laughing and reaching for everything.