After finally getting ahead of the storm we followed from Denver, we made it into Kansas for a couple of days.

Late that afternoon we spent the night at a pretty quiet rest stop near Morgan where in the strong winds we completed our daily steps.

In Goodland, we stopped to see a giant Van Gogh painting outside their Visitor’s Center

Next stop was to check out the oldest active Geocache site in the world near Mingo.  By this time we were out of the bad weather and appreciated the sunshine.

Doug deposited something there for his cousin, Marnie, like he did when he climbed Kilimanjaro back in 2012.

Then we stopped at Oakley, KS where we visited the Buffalo Bill Cultural Center

and the Fick Fossil Museum

Further down the road, we checked out the Little Jerusalem Badlands State Park – unfortunately we only found out when we got there that in order to walk down amoungst the rock formations you had to book a guided tour.  There are two trails along the cliff edges that we did walk though ti at least see the viewpoints.

We carried on down the I70 seeing lots of windmills:

and oil derricks in the dead corn fields:

We next chose to check out Mushroom Rock State Park where there are two large mushrooms and some weird rock formations.  There is no camping there but it’s on a remote dirt sideroad so we pulled into the tiny pullout parking area next to a concrete pit toilet building and decided that the chances were quite slim that someone would come by and kick us out, so we’d spend the night here.

It was lovely and sunny so after a walk around the park, we pulled out our chairs and a cold Corona for happy hour.  Only two other vehicles stopped by the park that afternoon and we had a quiet night with no one kicking us out.

Next day we stopped in Abilene, Kansas – the birthplace of President Eisenhower.  Due to COVID it turned out that the museum, presidential library and visitor’s centre were all closed but we did take a walk around the area and his boyhood home was moved to this spot as well.

Across the road was the Greyhound Hall of Fame and we took a quick visit inside to check it out and we got to pet a lovely 11 year old greyhound. 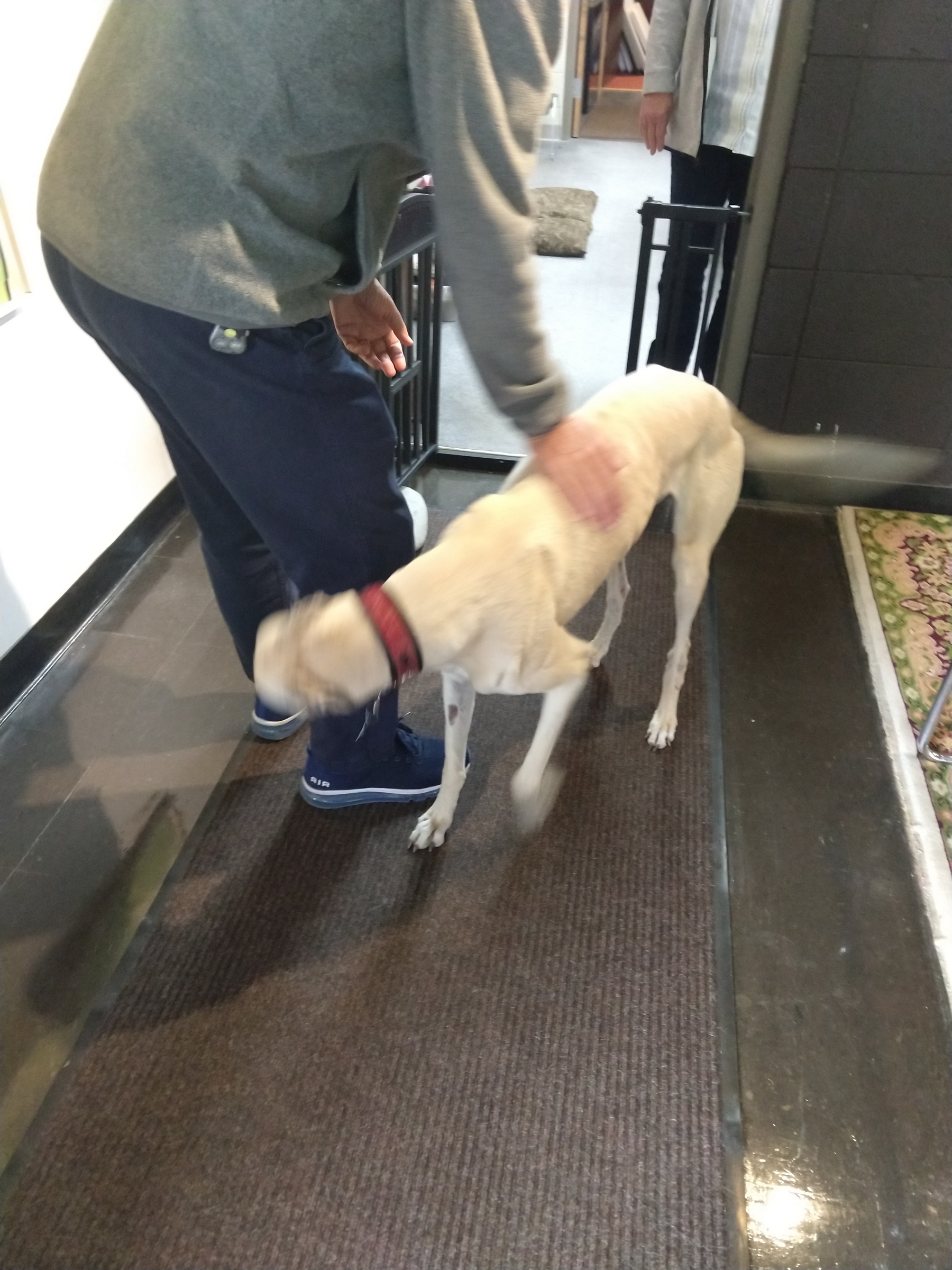 We arrived in the city of Topeka, which we’d visited back in 2015.  The city seemed to be a hub for road construction and it was not easy to get to the sites we wanted to see.

First was The Ritchie house– built by abolitionists John and Mary Jane Ritchie in 1856 – was a station along the Underground Railroad and is considered to be Topeka’s oldest home.

The Equality House and the right wing church across the road:

The Equality House is a rainbow-colored house situated across the street from the right way Westboro Baptist Church, an anti LGBT hate group.  It was purchased by the founder of nonprofit organization, Planting Peace, after he saw a “for sale” sign on a nearby house when looking at the community on Google Earth. He had the house painted in the colors of the rainbow flag, to show support for LGBTQ rights.

The Equality House is a symbol of compassion, peace, and positive change and stands as a visual reminder of our commitment, as global citizens, to equality for all.

Our first stop after crossing the state line into Missouri was to check out Google Fiber – the fastest internet in the country and it was started here in Kansas City, MO.

After getting some info inside (it’s really about home internet, no so much for the public to use), we stood outside and used their free Wi-Fi to do some fast downloading of shows we like.  We were getting shows down in seconds!

We spent that night at a rest stop near Concordia and the next day we moved on to the town of Boonville, where we stopped at the Old Cooper County Jail – it was closed so we could only take pictures.   It is the longest operating county jail in the State of Missouri. It was built in 1846 and operated until 1978. Famous prisoners have been held here, including Frank James, brother to infamous Missouri outlaw Jesse James.  Men were put to death by hanging here. The last public hanging in Missouri took place in the barn here in 1930.

Thursday morning we stopped in at a Best Buy store in Columbia, MO to buy a new phone that would take two SIM cards.  Fran has become quite sick of carrying two phones (now that we have a T-Mobile sim) and the latter is old and slow.

After looking at few, we picked one and the saleslady, Marisa, began doing the swap and transfer of data.  After two hours, she and another salesman realized that these Samsung A52 5G phones is not yet ready for the use of two SIM cards although it had two slots!  Info on the back of the box in fine print, says the “technology is coming….”  WTH?

So after some discussion, they mentioned that they had an open box special on a OnePlus 8T (the same phone our son, Josh, has) and the price was only slightly higher.  Okay, we’ll take. In 20 minutes the set up and transfer was done – helps if you are working with all the information, right?

That afternoon we found a wild camp at the Danville Conservation Area.

Friday morning we made our way in the City of St. Louis where we had scheduled the 10k maintenance check up on our Tundra.  First we stopped at a hotel we booked for the night so we’d have somewhere to squat for the afternoon and get showers.

Doug unhitched the trailer in the parking lot, Fran went into the hotel lobby to use the Wi-Fi while we waited for our room to be ready – we were there around 11 am.

By the time Doug walked back, Fran was in the room and we went out to the trailer to have brekkie.  We spent the afternoon online doing a lot of different things (like blogging!) and awoke to a cloudy, cool morning.

(Sidebar:  when we go to a hotel, we bring in alcohol spray and spray down everything we might touch before doing anything.  Every hotel we’ve been in requires masks and there is not typical hotel breakfast offered; if they do offer anything it’s either bring down your room tray and get it served up to you or picked from an assortment of items that you can put in a paper bag, or just some grab and go bags.)

As it was not a great day we spent most of the day driving across the southern part of Illinois into Indiana.

We made a few stops along the way:

The Lewis & Clark monument to the Confluence of the Mississippi and Missouri Rivers just inside the state.  The ability to go up the tower is currently by appointment only, so Doug checked out our maps.me app, and found a trail that goes towards a point where we might see the rivers meeting up.

And a grainy picture of where the rivers actually meet:

In Collinsville, we came across the world’s largest ketchup bottle:

After crossing into Indiana, we stopped in Mount Vernon where we viewed some road sign art:

In Nashville, we saw this tiny wooden church:

By late afternoon, we’d had enough  and began looking for a rest stop; we struck out at two (no overnighting allowed) and when we stopped for gas before the third one, still 80 km / 50 mi down the I64, we asked about where we could overnight and they said we could do so in the back of their station, so we did.

As we tried to park, a woman with a large farm animal fifth wheel, came over and ask if Doug could help here with her trailer lights as a wire had come loose.  It took about an hour, but he got it sorted for her.

Next morning we awoke to rain and dark clouds.  We drove a short distance to Warrenton where we saw a pink martini drinking elephant with a few friends:

Next was the Weather Forecasting Rock; it was still raining and the rock was wet so I guess it’s true! 😉

We moseyed along further east to the town of Santa Claus:

It was still raining and not pleasant to walk around so we just drove around and then returned to the I64.  There was a Kris Kringle Supermarket, a Rudolph’s Motel and Mrs. Claus’ Bakery shop in town.

We then drove into the state of Kentucky, and before parking downtown – it was Sunday so it was  good morning to drive into the city with a trailer and find free street parking – we saw the World’s Largest Whiskey bottle:

Then drove past the World’s Largest stone clasping hands:

We parked on Main Street a few blocks from the main touristy area where you will find the World’s Largest Bat:

And there’s kind of a walk of fame of bats and here’s Babe Ruth’s plaque:

Enroute to the next attraction was a riverfront park

as well as the monument commemorating the establishment of the city:

And then we arrived at the Large Troll outside a pub:

We took a round about way back stopping at the Louisville Visitor’s Centre so that Doug could pose with Colonel Sanders before returning to the truck and trailer:

We drove a little east out of town and found a Costco for cheaper gas before making out way to a hotel for that night.  It was still cool but the rain had stopped.

We made no further stops in Kentucky (we’ve been here before) but continued eastward into our 50th state:  West Virginia.

NOTE:  While you are reading this we will be on our 40th anniversary trip in ICELAND!

Back in Santiago, CHI